Lotus Caravans Give Away A Luxury Trooper To Couple In Need

When a rogue Brisbane caravan dealer took Julie and Ron’s money, but never delivered their dream Lotus Trooper caravan they were horrified. That was until Lotus Caravans and it’s supplier network came to the rescue and presented the keys to an immaculate Lotus Trooper with all the trimmings to send them on their ultimate Australian road trip.

Julie and Ron were planning the ultimate Aussie road trip. Ron’s brother lived in Melbourne, Julie’s sister was in NSW and they planned to drive down from Brisbane in a brand new caravan to see the family, stay in some beautiful national parks, experience the East Coast of Australia and do it in style. After reading caravan reviews they had their heart set on buying a Lotus Trooper.

“We were attracted by the fact you could customise the Lotus Caravans. It’s not an ‘out of the box’ caravan, it’s got your personality, the floor plans are great and stamped with what’s important to you as a customer” said Julie.

“I loved the fact we’d have an ensuite with loads of room to enjoy getting ready in the morning … and I’d have space for all my hairdryers and beauty stuff!”

Ron  agreed: “We were so excited about the delivery, but it started to get to be a worry when every two weeks we’d call to find out when we could pick it up and the dealer said, nah mate, it’s not ready yet, call back next week”

When Julie and Ron realised that they were never going to have their customised Lotus Caravan delivered as the dealer had disappeared … with no way to contact him, the nightmare became all too real.

“We received a phone call from Dave Martin from Lotus Caravans to say the van hadn’t even started because no money had been received.  We had paid over $100, 000 for our van. We’d even been to visit the dealer and they continued to tell us the van would be delivered in two weeks.

But the story from Dave was, that wasn’t the case, as money hadn’t been received.”

In a few short weeks, a caravan dream had become a caravan nightmare.

Julie recalls the weeks that followed were laced with fear and dread. The Grays had lost their life savings to some rogue dealer and they had nothing to show for it.

Julie said: “I called Dave at Lotus Caravans HQ and explained what had happened. I might have had a few harsh words! I was distraught as it was clear no order had been placed for a Lotus Trooper.”

We were pacing the lounge room and then three days later we received a call from Lotus Caravans.

“I remember Dave saying: ‘We’re going to build your van’. And I burst into tears.” 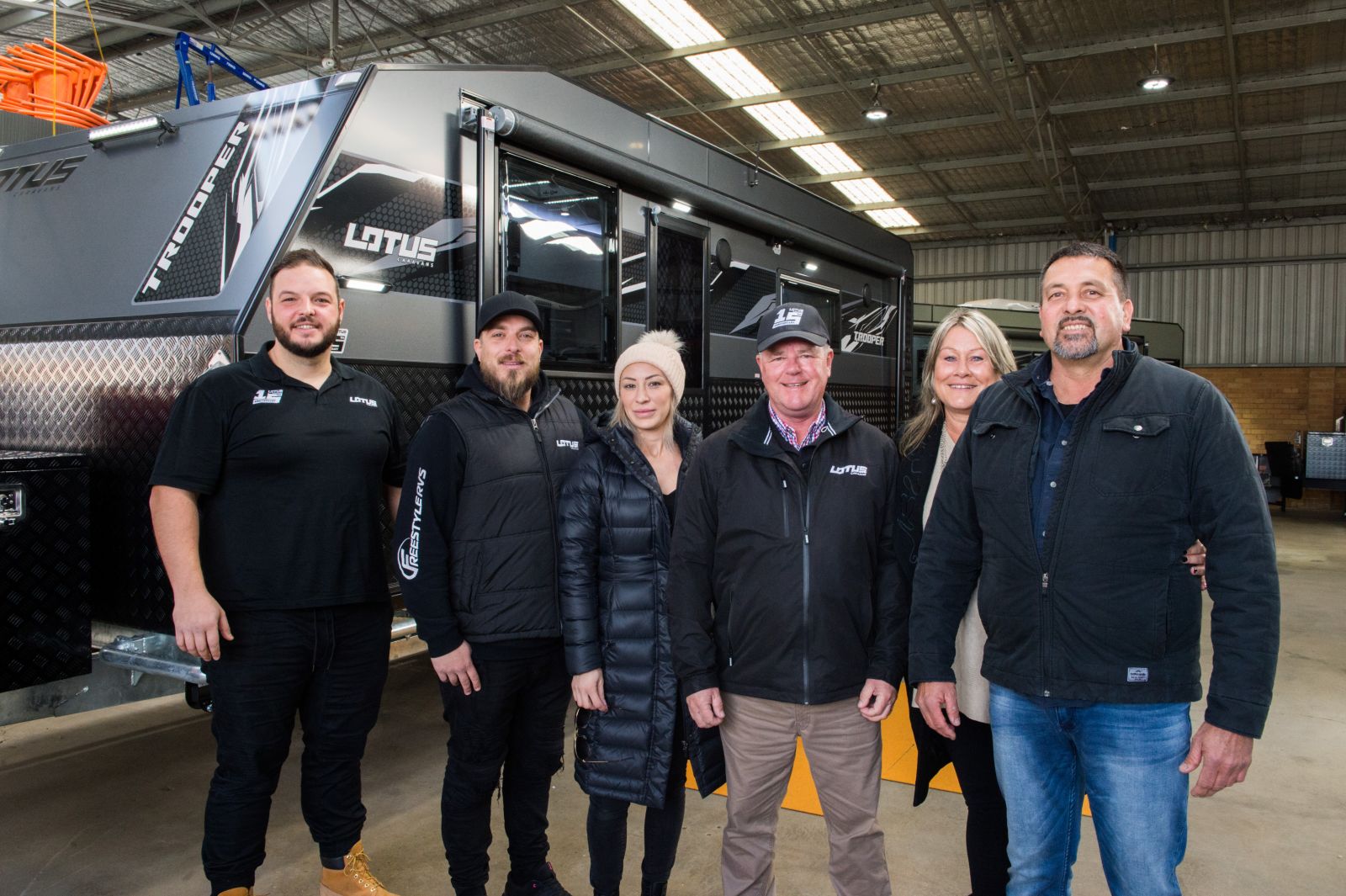 There must have been a few people in the room as I heard George say:
“Give me the phone, I want to talk to her and tell her the news… you bet we’re going to build your van!”
Ron agrees smiling: “It’s a devastating story but George and everyone have made it great. All the contractors got together to make this happen … we can’t express how grateful we are”.

With a phone call from Lotus Caravans, The Grays went from a living nightmare to living the dream.

On Thursday 8th August, they were presented with their brand new Lotus Trooper at Freestyle RV’s, Somerton.

Customising a Lotus Trooper Caravan is no mean feat - it takes an army of suppliers to deliver the bespoke quality finishes Lotus Caravans is famous for.

Appliances donated by DOMETIC such as the Thetford oven and new Dometic 12v fridge create a home away from home and interior finishes such as Laminex Diamond Gloss laminate benchtops, reinforced door hinges and an Italian leather lounge suite add a luxurious element thanks to Anton Mouldings and Designer Form.

There will be no lifting or bubbling of the vinyl floor thanks to Worthington Industries donation of their unique one-piece caravan panels (floors and walls). The panels are custom manufactured to customers’ requirements and are detailed and undercoated with Worthington’s Opalc (black water-resistant coating).

Interiors might be deluxe but the exterior of the Lotus Trooper is built to withstand the ultimate Aussie road trip adventure. Lotus Caravans, in partnership with industry leader G&S Chassis, has designed a revolutionary truss system chassis which helps cut weight to allow increased durability for this off-road beast.

The lights will never go out thanks to REDARC’s generous donation of an electrics system fed by 200 amps of lithium power, driven by a REDARC Inverter 2000 watt battery management system. Amongst other features, a  push-button resettable fuse panel has been added as a fantastic safety feature.

With 200 litres of water storage and 680 watts of solar power, the Lotus Trooper is built to keep going and going on all terrains.

Ranger RV Supplies came to the party by supplying the Lotus Trooper’s trademark German-made composite panelling to fight off debris. Other amazing contributions such as fan ventilation, mini skylights and an eye-catching 12v shower hatch with LED lights mean the Trooper is set to be cool inside and out.

It's impossible to get the show on the road without wheels, and with Primal Alloy Wheels donation of BF Goodrich’s toughest AT tyres on the exclusive 17” Lotus Trooper Caravan, The Grays are sure to ride in comfort and style. 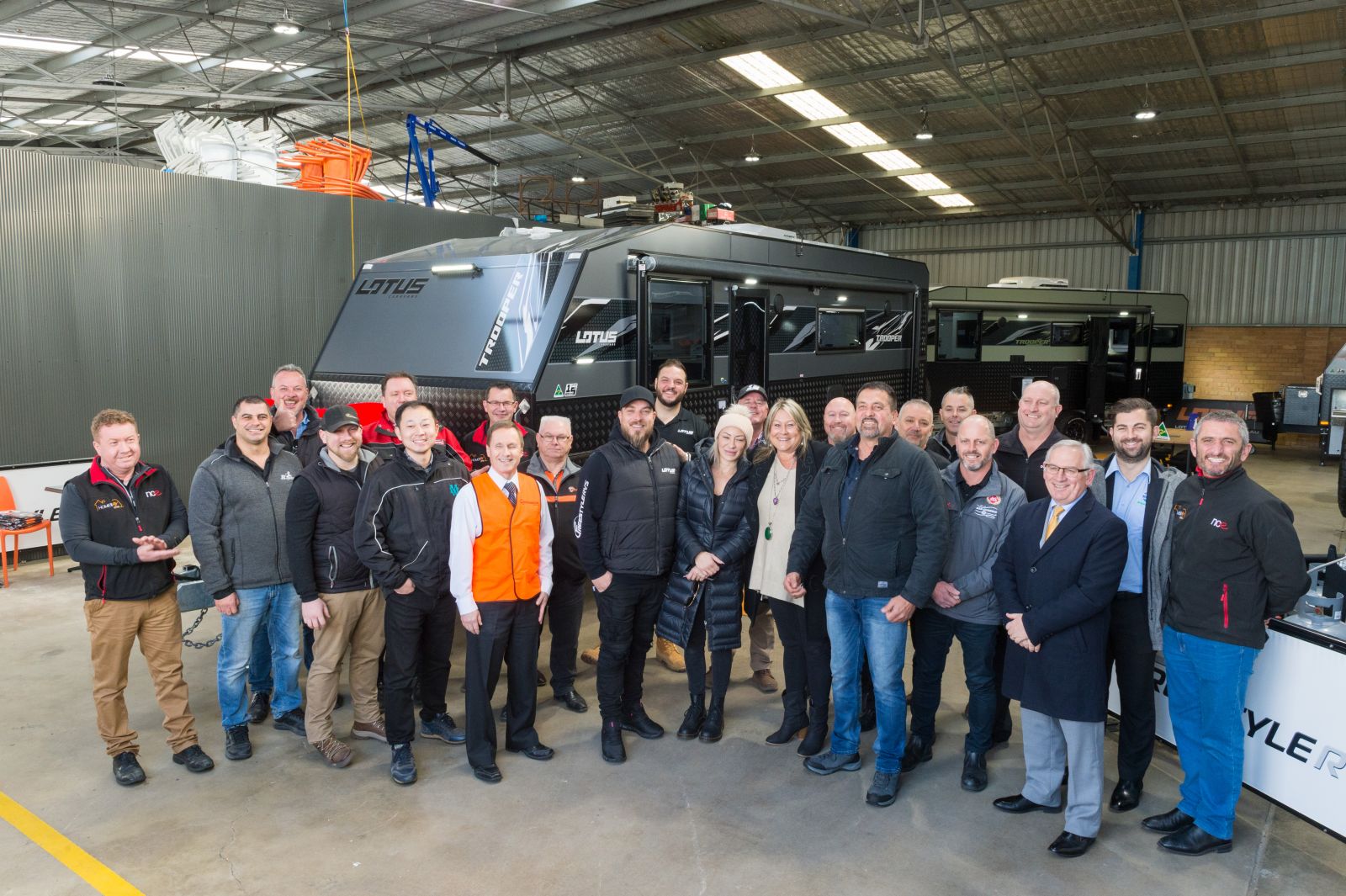 Glenn from DOMETIC, Tim from REDARC Electronics, Nick from Primal Alloy Wheels , Con from Halifax Vogel Group, Rob from Anton’s, Paul from Worthington Industries, Ray from Ranger RV Supplies, Marc from G&S Chassis and Wayne from Designerform were all in attendance alongside Dave and Graham from Lotus Caravans and all the staff that worked tirelessly to bring the Lotus Trooper caravan to life.
Julie and Ron were (almost) speechless as Graham handed over the keys and they cut the red ribbon on their brand new Lotus Trooper.

Julie was quite emotional: “To think that we have people in our world like this…. it’s amazing. We need more people like this, more caravan people like this and people like George and all of you suppliers… thank you so much. This is just magnificent!”

Ron was humbled by the event:  “I’d like to thank everyone involved with building us this beautiful van, the suppliers, George and Dave - the way you’ve organized it and got everyone together to present the van to us … just thank you!”

Now the Lotus Trooper caravan has been handed over to The Grays what road tripping adventures await?

Julie said excitedly: “We’re off to Moama for a few days, then a few days in NSW, after that we go home and pick up our little baby doggies and they’ll come travelling too.  Overall we’ll have three weeks of travelling in our new baby.”

Ron smiled: “We’ll definitely test it out and put it through its paces!”

Would you like to pass on your congratulations to Julie and Ron? Head over to the Lotus Caravans facebook page and join a community of Australia’s most caring caravan owners.